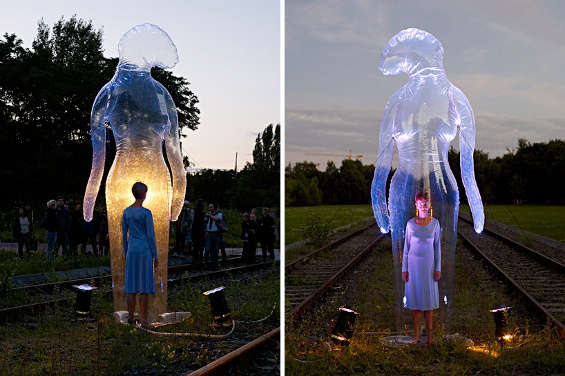 Jordy E — November 7, 2012 — Art & Design
References: victorinemueller & beautifuldecay
Victorine Muller has established her own sect of performance art via her illuminated PVC sculptures. Muller invites onlookers to take in her work while standing directly within the pieces, speaking to the continued relevancy of staged productions.

These clear installations are optimal for Muller's interactive vision. While she remains clad in the sheets of polyvinyl chloride, they are translucent, allowing viewers to develop a direct relationship with the creative designer.

Her latest release titled 'Wild at Heart' plays with beastly themes as Muller steps into the bodies of elephants and penguins. The ginormous frameworks do not take away from the raw emotion that is present during her displays however. According to Muller, the shows successful unveil "something that is not said and cannot be said, but that is."
6.1
Score
Popularity
Activity
Freshness