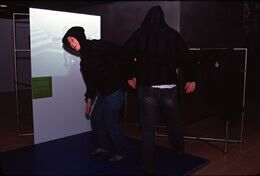 Bianca — February 18, 2008 — Unique
References: com-pa-ny & saumadesign.net
Share on Facebook Share on Twitter Share on LinkedIn Share on Pinterest
While the Takkiainen was designed to bring together lonely people who might happen to brush up against each other in a busy city, the most fantastic implication of the Velcro jackets is their possibility to attach babies and children to the body. How much easier would it be to stick your kid on your back than have to worry about holding them on when you're giving them a piggy back? Hands free to sip a latte as you go! But how do you feel your little one off again after?

The Takkiainen jackets are made entirely out of Velcro. The project by Com-pa-ny based on a concept Aamu Song and developed further by Johan Olin, then finally turned into a piece of wearable clothing by Sari Manner. It was shown at an exhibit in an emulated city setting where visitors could try on six different jackets and experience how easily they stuck to each other.

"Takkiainen is a jacket for lonely or bored people," according to Sauma Designers. "It is designed to help the wearer to get in contact with others. Since we brush against each other every day as we move around in the city, we can use our clothes as a medium for meeting people and communicating with them."

The word Takkiainen comes from a hybridization of the Finnish words takki, which means coat, and takiainen, which means bur.
4.6
Score
Popularity
Activity
Freshness
Get Better and Faster