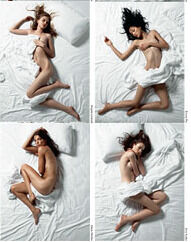 mediterranean — May 18, 2008 — Naughty
References: nymag
Share on Facebook Share on Twitter Share on LinkedIn Share on Pinterest
While it is a non-issue and pretty common occurrence in European magazines, it's very rare for mainstream American publications to show bare breasts or frontal nudity. However, that seems to be changing as the new issue of V magazine not only breaks the taboo, it shatters it.

Their latest issue features not one or two, but 18 nude shots of some of the hottest up and coming names in the modeling and fashion world from IMG modeling agency.

The result is a very daring yet tasteful shoot that does not come across as gratuitous or scandalous, proving that nudity can be art.

Maybe V magazine was encouraged to go the extra mile by having recently made itself digitally available for free: