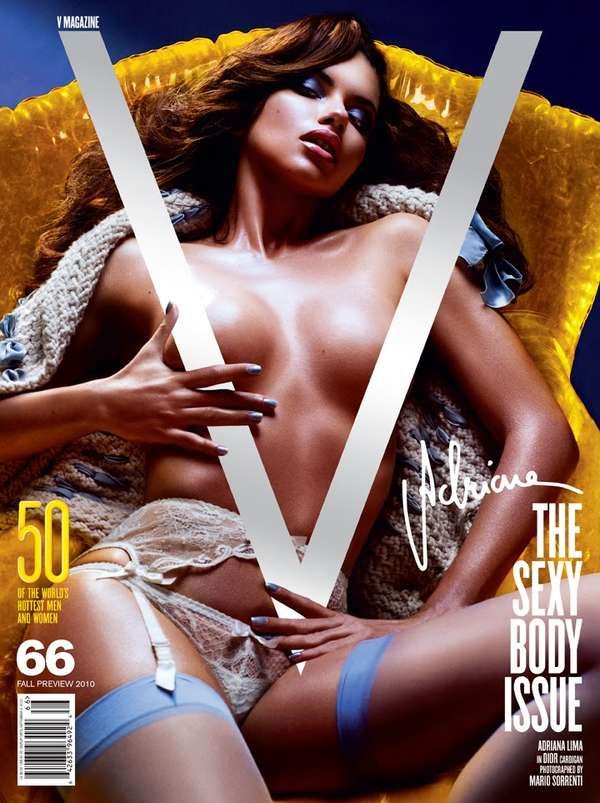 Jordan Sowunmi — August 18, 2011 — Naughty
References: vmagazine & zac-fashion
Share on Facebook Share on Twitter Share on LinkedIn Share on Pinterest
September is the biggest month for fashion publications, and they tend to pull out all the stops -- the V Magazine #66 cover series is a perfect example of how this is the suitable environment for the world's top models to make their presence felt.

And V Magazine is aware of that. In honor of V Magazine #66, they shot five different covers featuring five of the world's most successful supermodels, including Adriana Lima, Lily Donaldson, Isabeli Fontana, and Natasha Poly. Some of the major fashion campaigns that have been fronted by those stunners include Victoria's Secret, Pirelli, Louis Vuitton, Versace, Armani, and BCBG.

This V Magazine #66 cover series was shot by celebrated Italian photographer Mario Sorrenti, best known for his work with nude models for Vogue and Harper's Bazaar.

My favorite shot in this collection is the one of Lima, staring at the camera in a gaze that is equal parts alluring as it is fierce. This is how you maintain your dominance at the top of the cutthroat fashion world. With covers like this under her belt, it's no surprise Adriana Lima has shown a longevity that many older models would kill for.

The V Magazine #66 issue is on newsstands now.

Implications - A company seeking to raise immediate brand awareness would be wise to invest in sexually charged advertising. The ads will draw attention from consumers interested in the products, critics of the ad's sexual content, and a controversy-hungry media seeking a polarizing story.
6.3
Score
Popularity
Activity
Freshness
Get Better and Faster