US Army gets into Video Gaming 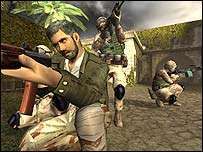 The game, entitled America's Army, simulates both combat and life in the military service. It is intended to inspire young Americans by relating the experiences of real-life troops. The free game was released in July 2002 and has gone on to be one of the top online games, with seven million players.

To put a human face on the wars in the Middle East, the latest version of the game features the stories of nine soldiers who served in Afghanistan and Iraq. Players can enter a virtual recruiting room to learn about the real soldiers' stories, and then compare their online gaming accomplishments with the soldiers' real-world service.

"It gets our stories out there about what the army is doing," said Sergeant Matt Zedwick, who served and was wounded during a tour of duty in Iraq in 2004.

"It is a good communications device to introduce people to what is really going on, rather than what you see on the news. It shows we are not robots, that we're not trained killing machines. We're just people."

Small plastic figures of the soldiers featured in the game will go on sale to enhance the campaign.
4.3
Score
Popularity
Activity
Freshness
Get Trend Hunter Dashboard