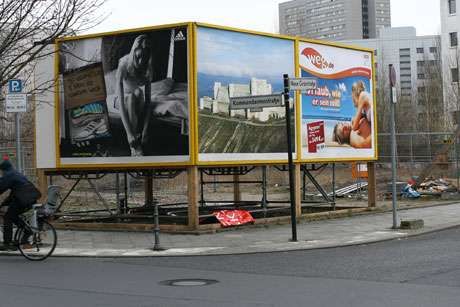 In March 2008, however, a friend of mine actually slept in it.

On the corner of Kommandantenstrasse and Neue Gruenstrasse one finds this billboard that disguises the hotel room behind it. The room has no windows, so it is definitely a room without a view.

Henri commented that when he stayed in the room, he had slept very comfortably, but he was a bit afraid people might build a fire under the room. Luckily the giant steel watchdog opposite the hotel room in the sculpture park watched over his safety.

When I went to visit him in his hotel room, I was surprised to find a real bathroom. There was water for the wash bin and shower via a reservoir. There was a chemical toilet and there was electricity.

My pictures show you could hang your clothes, a TV set and a drawer chest and an easy chair. All very doable.