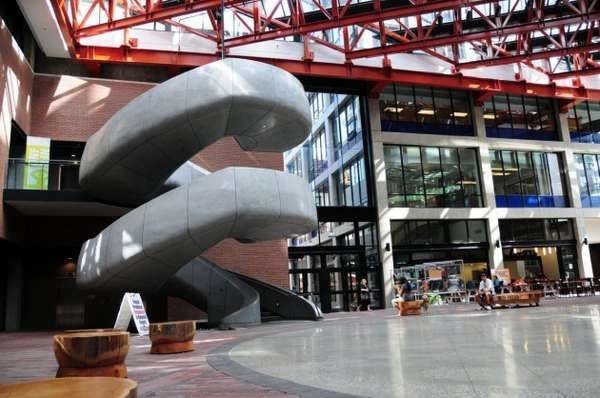 The Umbilical Rebirth Stairs is Inspired by Woodward's Revamp

Meghan Young — August 26, 2011 — Art & Design
References: henriquezpartners & contemporist
Share on Facebook Share on Twitter Share on LinkedIn Share on Pinterest
Although some might think that the Umbilical Rebirth Stairs winding shape is rather disturbing once they learn the inspiration for this design, the idea of creation and birth is definitely not a creepy notion. The fact that this staircase resides in the historial Woodworth’s building located in Vancouver, British Colombia, which was recently revitalized and revamped, its influence and presence makes much more sense.

Designed by Henriquez Partners Architects, the imposing, concrete Umbilical Rebirth Stairs lies in the atrium of a complex of condos and shops. It appears to end abruptly at the top, giving visitors a nice, unobstructive view from its top. At the bottom lies a shallow pond from which these stairs rise like a giant umbilical cord.
2.3
Score
Popularity
Activity
Freshness
View Innovation Webinars