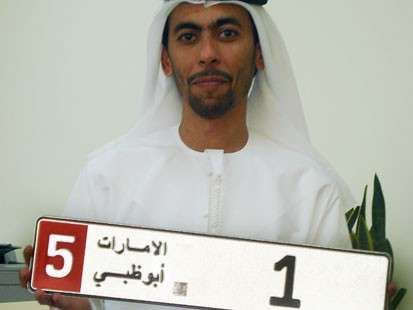 Ayman — February 28, 2008 — Autos
References: ap.google
Share on Facebook Share on Twitter Share on LinkedIn Share on Pinterest
I think its a good strategy by the Emarati government to auction exclusive vanity plates to ridiculously wealthy people and use the money for a good cause. The plates cost the government nothing, and the money would go to another vain luxury otherwise. In the latest charity auction in Abu Dhabi, United Arab Emirates, a vanity license plate with nothing but the number "1" on it went for a record $14 million. Proceeds from the auctions go to a rehabilitation center for victims of traffic accidents.

Ordinary automobile license plates issued to drivers here â€” and even most other vanity series plates â€” carry both Arabic and Western numerals and script, defining the issuing city and country. Khouri's plate, however, has only the Western numeral and no letters.