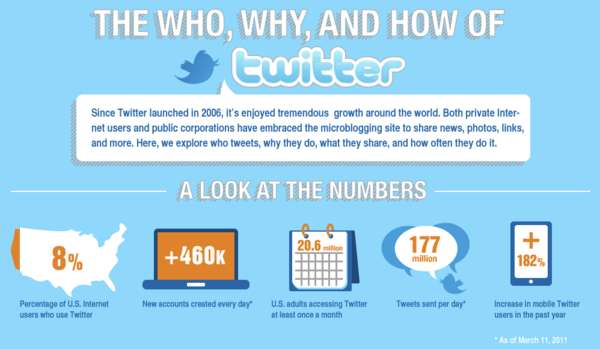 Corinne Guirgis — June 8, 2011 — Social Media
References: blog.buysellads & holykaw.alltop
Share on Facebook Share on Twitter Share on LinkedIn Share on Pinterest
Despite its growing significance in the world of social media, confusion still surrounds Twitter in terms of who why and how it is used. The folks at BuySellAds.com decided to explore this phenomenon using the above Twitter infographic, which digs into these questions. The statistical analysis in the infographic showcases the importance of the tool and its potential to change the scape of social media and Internetting as we know it.

BuySellAds.com recognized that media outlets, businesses large and small, and people around the world are talking about it and used this Twitter infographic to dig deeper into the demographics behind the microblogging service. In other words, the who, why and how of Twitter.

Some of the significant statstics they found include that 460,000 Twitter accounts are created per day, 177 million tweets are sent per day, 24% of Twitter users check the service multiple times per day and 77% of top 100 companies have active Twitter accounts.

This infographic is most definitely an interesting read for both active Twitter users and those wanting to learn more about its significance and potential to change the face of communication on a global scale.

Implications - As social media continues to expand, so does the ability of companies and brands to use social media for comedic fodder. Because of the ubiquity of these social media trends, they appeal to the active and engaged public in an original way by referencing something they have an intimate knowledge of. As a result, the consumer is more likely to communicate with a company or brand through the social media product they use to joke about web 2.0.
4.5
Score
Popularity
Activity
Freshness
View Innovation Webinars