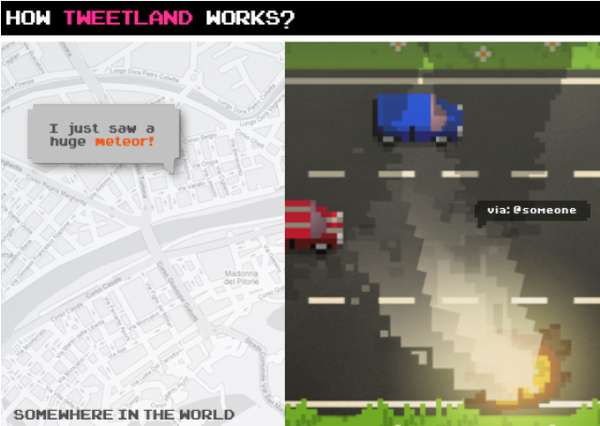 Tweet Land's Gameplay Changes Based Upon What the World is Tweeting

Both of the games have 8-bit style graphics and simplistic gameplay. What sets these games apart from all others on the Internet is their Twitter integration. For example, Route 140 is programmed to recognize specific keywords in tweets such as "meteor" or "car accident." When someone tweets about these events, players will have to dodge an in-game meteor or car accident.

Love City works using tweets about love and hate. The game features an "anti-Carebear" who must kill all of the citizens of Love City who try and hug him. Players get ammo and new guns from "hate" tweets and enemies spawn based upon "love" tweets.

I'm not too huge on Twitter, but I do know a kickass video game when I see it. Tweet Land has just the right mix of retro styling and innovative gameplay to be a huge hit among mobile gamers. I'm calling it now: Tweet Land will be the new Angry Birds.
1.5
Score
Popularity
Activity
Freshness
Get the 2021 Trend Report FREE