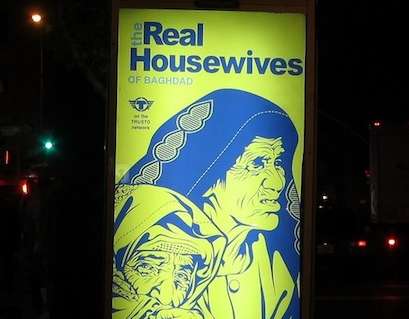 Emily Evans — August 23, 2011 — Pop Culture
References: arrestedmotion & mymodernmet
Share on Facebook Share on Twitter Share on LinkedIn Share on Pinterest
For those who haven't seen the work of TrustoCorp before, a quick look at the TrustoCorp Reality TV project should pretty much bring you up to speed. The street artists behind the name TrustoCorp are known for their media stunts, which pop up in places like subways and bus stations in New York City.

As reality television has pretty much taken over the airwaves in recent years, exposing consumers to the opulent lives of the rich and famous, the TrustoCorp Reality TV project attempts to bring viewers back to reality. While shows like The Real Housewives and The Real World claim to be reality, these creative posters of places like Baghdad and North Korea may be much more honest.

Implications - Though North American society is somewhat indulgent, companies that keep consumers grounded with everyday products and depictions of reality will continue to have a place within modern society. Television acts as an excellent jumping off point for companies to reflect on within their mission statements and product innovations.
1.5
Score
Popularity
Activity
Freshness
Get the 2021 Trend Report FREE