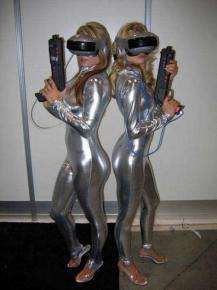 The Next Level of Video Game Reality

Trend Spotter — November 1, 2006 — Unique
References: trimersion & gizmag
Share on Facebook Share on Twitter Share on LinkedIn Share on Pinterest
Trimersion is the next generation of First Person Shooter video games. The technology leverages head tracking and a tracking gun replaces the mouse and keyboard. The interfaces is very natural making the game feel realisic. It's also now in full prodcution with a number of major improvements since the first prototype back in 2005 at E3. Giz Magazine reports, "The new features are a double rocker trigger for main fire and alternate fire. The gun also has all of the controls of a standard Xbox or Playstaion game pad. The tracking device has been simplified and miniturized to a fraction of it's former self. This means better performance, less cost and less weight. The most significant improvement is the freedom of movement. Once you put the Trimersion on, you can move and turn around freely without worrying about wires or connections. The headset and gun are powered by a standard 9v battery. The wireless connection goes back to a base station that has a video and VGA input. This is sent to the headset and displayed in a new optics module." This is the next level of video game reality.
4.6
Score
Popularity
Activity
Freshness
Attend Future Festival