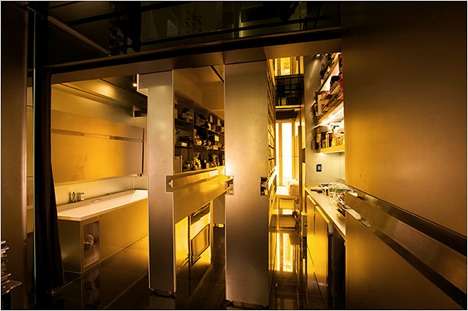 Jordan M — December 24, 2010 — Eco
References: nytimes & treehugger
In the heart of downtown Hong Kong’s Sai Wan Ho district, crammed almost inexplicably within the tight confines of a 344 square foot apartment, lies what is quite possibly (and, quite hopefully) the future of green, efficient and outright cool urban interior design and architecture: the transforming apartment.

Meet Gary Chan, a man who has lived in the same apartment for over thirty years, but who saw possibility and promise where many others would have seen only dreary and dismal disappointment. Through a series of sliding panels and walls, Gary is able to effortlessly transform his tiny living space into no fewer than 24 different configurations - everything from a futuristic bathroom, to a fully-equipped kitchen, to a wet bar and/or “gaming room”.

In a city (and world) where space is an ever more lucrative commodity, and where population density is increasingly linked to ever increasing domestic crime, abuse, and tension in urban centers such as Hong Kong, Gary has achieved with a 344 square foot transforming apartment what most people could only dream of with a space ten times that size.

He calls his transforming apartment the “Domestic Transformer”, and as you watch him easily configure his living space at whim it’s not hard to see why the futuristic sci-fi moniker is definitely applicable. The cost of the renovation? Just over $200,000.
5.8
Score
Popularity
Activity
Freshness