Tracking your Teenager (with a GPS phone) 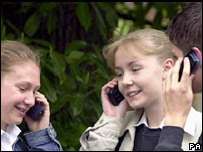 Nigel Goodwin — April 13, 2006 — Life-Stages
References: news.bbc
Share on Facebook Share on Twitter Share on LinkedIn Share on Pinterest
Disney is lauching a new service in the US to allow parents to monitor how their kids use mobile phones. Parents will be able to keep track of voice, text, video and picture messages and set limits on their kids' calls.

And here's the kicker: the phone will allow parents to locate their children via GPS.

Disney is hoping to exploit an emerging niche market of mobile phone users aged 10 to 15 years. The company is targeting 20 to 30 million kids for the service.

According to technology analysts at Jupiter Research, about 45% to 50% of 13-year old Americans have their own phones. Among all teenagers with mobile phones, nearly two-thirds have their parents pay the bill. So, with kids demanding phones and parents paying for those phones, and with parents wanting to keep tabs on their kids' activites and whereabouts, prospects for this service look bright.

Whatever happened to kids just leaving notes on the refrigerator door when they're going out?
6.4
Score
Popularity
Activity
Freshness
Get Better and Faster