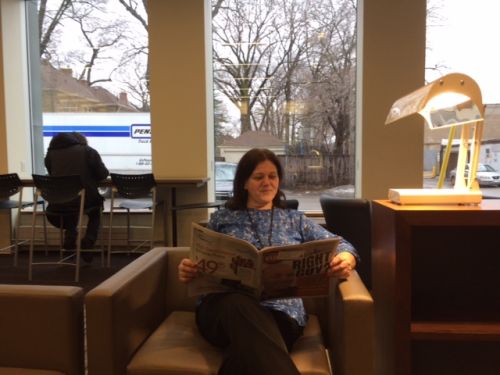 Joey Haar — February 21, 2017 — Lifestyle
References: torontopubliclibrary.typepad
Share on Facebook Share on Twitter Share on LinkedIn Share on Pinterest
The medical literature behind seasonal affective disorder, or SAD, continues to support the anecdotal evidence of people feeling the "winter blues," and the Toronto Public Library has thus decided to take action. The municipal organization has recently introduced a pair of therapy lamps at two branches (Brentwood and Malvern) to help those who frequent the library to maintain mental health during the winter.

In regions such as Toronto where the winters make up a sizable portion of the year, people are exposed to less sunlight than during the warmer months. This results in a depressed state known as SAD, which carries with it symptoms like decreased motivation, difficulty concentrating, fatigue, sadness, and others. The Toronto Public Library's introduction of light therapy lamps shows the city's commitment to reducing these issues for Torontonians.
0.6
Score
Popularity
Activity
Freshness
Attend Future Festival