107 Ways to Waste Time at Work 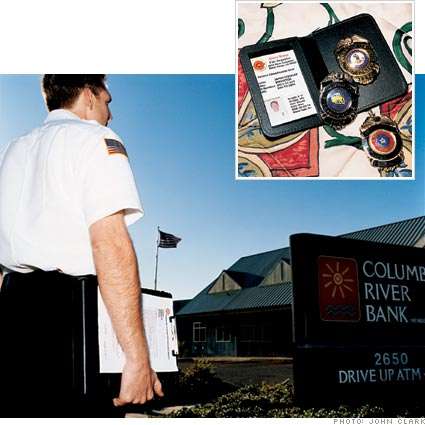 Before you apply for another ho-hum job as a paper-pusher or a server at Mickey D’s, you might want to check out the perks of working as a whiskey ambassador, a furniture tester or, if they’re part-time or odd jobs (no pun intended), you could do both.

What could be cushier? Spend the afternoon teaching Dewar’s clientele the proper way to taste and ‘admire the attributes’ of their finest Scotch; then you can trundle over to your night job at Simmon’s or Laz-E-Boy to sleep it off.

Not wacky enough to stave off boredom? Then check out the benefits of being a road kill scraper, septic tank pumper, oyster floater or adult store clerk (who not only tends shop but cleans up the ‘merchandise testing booth’). Ugh. Dirty jobs, but somebody has to do ‘em.

If these foul professions aren’t exactly what you had in mind, you can work as a chicken sexer for a really fowl job.

Okay, I couldn’t resist that, but Chicken Sexing is one of my Top Ten. Flipping little yellow fluff-balls upside down all day can’t be too difficult; girls for egg layers and boys for meat. Knowing which is which is another matter entirely.

One of the advantages of having a ‘really odd job’ is the cool ice breaker at parties. Imagine the next time someone asks “What do you do?” and you answer “I’m a snake milker”.

Here are the other nine picks:

2. Corporate Bank Robber - Security and surveillance manufacturers need to test the equipment. According to Fortune Mag, they hire people to break into banks. Honest!

3. Fountain Pen Repairer - Yes, at least one person actually does this for a living. In an era when you can buy disposable Bics for about 10 cents a piece, you might want to check this one out carefully before applying.

4. Gumologist - Why be just a plain old chemist when you can be a gumologist, testing the elasticity of Trident and Dubble Bubble?  Wrigley’s is certain to have a good dental plan as well.

5. Imax Screen Cleaner - Now, here’s a job I’ll bet you never thought of. These screens are HUGE, so make sure you have extensions for your Squeegee extender. It also helps to live in a city with more than one Imax.

6. Kiddie Ride Refurbisher - Remember the bobbing ‘25 cents a ride’ elephants at the supermarket and the boats you steered around a tiny moat at the local fair? They’re now hot collector items and someone has to bring them up to spic. With carousel horses auctioning for thousands of dollars this is a self-made job that could prove quite lucrative.

7. Ski Run Designer - Artistic types often have trouble finding meaningful employment. A ski run map designer would be fulfilling on a large scale and make you a popular figure at Apres Ski gatherings.

8. Rattlesnake Milker - I wasn’t kidding. Rattlesnakes and other venemous reptiles don’t just donate their deadly liquids for the antivenom industry. Some brave souls have to milk them. It’s a toss up, however, as to whether snake milkers or alligator wrestlers make more danger pay, so do check out both options.

9. Fortune Cookie Writer/Translator - This is the optimum job for unemployed journalists who create crazy Top Ten lists while procrastinating on that novel in the dresser drawer.  Oh, yeah, that would be me.
5.2
Score
Popularity
Activity
Freshness
Get Trend Hunter Dashboard

Testing 52 Jobs in a Year
Sean Aiken's One Week Job