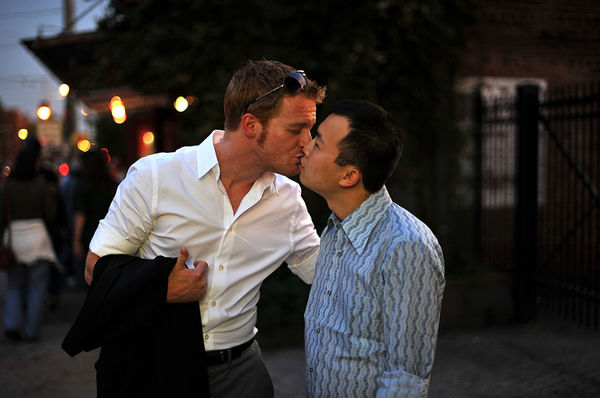 Tommy Kha Examines Ideas of Intimacy in 'Return to Sender'

Vasiliki Marapas — October 8, 2013 — Fashion
References: tommykha & slate
Share on Facebook Share on Twitter Share on LinkedIn Share on Pinterest
Photographer Tommy Kha has created a hilarious series of self-portraiture that revolves around kissing. Inspired by Lilly McElroy’s 2006 series ‘I throw Myself at Men,’ Kha came up with the idea for ‘Return to Sender,’ a collection of photos that feature him disinterestedly receiving kisses from friends, lovers and strangers.

Kha spoke to Slate about wanting to explore notions of intimacy, the cultural depiction of Asians in the media (specifically their absence as ‘protagonists’), and methods of self-portraiture. In terms of the intimacy angle, Kha says, “I think [the motivation] was wanting to belong, of wanting ‘to be seen,’ to be an object of desire (as the receiver of the kiss) but at the same time, to appear reserved and contradictory by denying the kiss.”

The end result, while thought provoking, is also hilarious: Kha looks apathetic and blasé while receiving some seriously passionate kisses – all of which are on the lips.
5
Score
Popularity
Activity
Freshness
Jeremy Gutsche Keynote Speaker