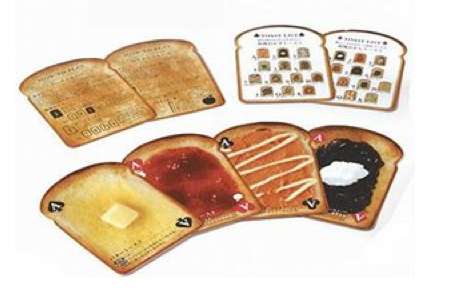 The Toast Playing Cards Serve Up a Delectable Deck

Within the realm of food preparation, bread is a blank canvas that can be dressed with anything from peanut butter and jam to tomatoes and tuna. We're all more than accustomed with the Jack, Queen, King and Joker characters within most hands, so to provide a little edible intrigue into a repertoire of strategy games is a feast for those who've dropped the deck for more antisocial diversions.

Toast Playing Cards can be purchased from the Japan Trend Shop, and serve up a buffet of golden brown and burned bread, spread with an extensive selection of condiments that will perhaps provide more possibilities for new card games.
2
Score
Popularity
Activity
Freshness
Get Trend Hunter Dashboard