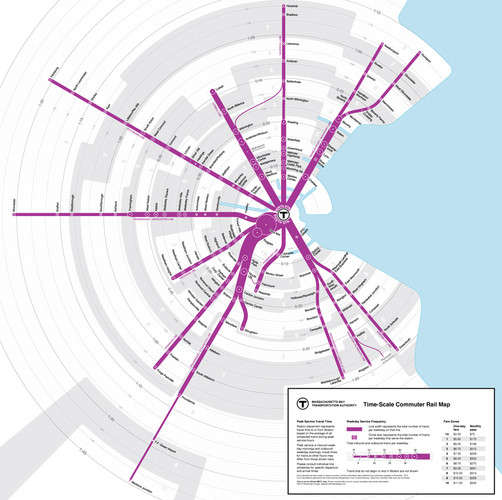 Meghan Young — January 11, 2013 — Art & Design
References: stonebrowndesign & fastcoexist
Share on Facebook Share on Twitter Share on LinkedIn Share on Pinterest
The Time-Scale Commuter Rail Map focuses on an important detail that has until now been neglected when it comes to transit map designs: Time. While evenly spaced stations may look appealing, they are far from informative when it comes to knowing how long it takes to get from destination A to destination B. Nevertheless, this design, if adopted, does give that information.

Designed by Peter Dunn, the Time-Scale Commuter Rail Map re-imagine's Massachusetts Bay Transportation Authority’s maps for the commuter rail system in Boston, which is known as the T. While similar to traditional maps that depict train routes snaking out from central nodes at North and South stations, the Time-Scale Commuter Rail Map additionally incorporates concentric circles. These circles indicate the length of time it will take from one station to the next.
0.6
Score
Popularity
Activity
Freshness
Attend Future Festival