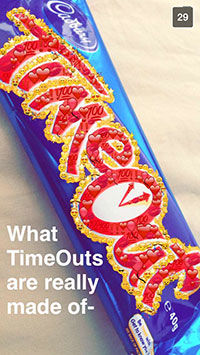 Cadbury Launched a Creative Snapchat Campaign for Its TimeOut Bar

Katherine Pendrill — June 21, 2016 — Marketing
References: cadbury.au & foodmag.au
Share on Facebook Share on Twitter Share on LinkedIn Share on Pinterest
This past December, Cadbury teamed up with Snapchat to promote its TimeOut bar in a creative and engaging way. These days, social media is one of the most effective ways for brands to reach out to young consumers. This campaign demonstrates how the interactive nature of social media can be used to create buzz around a product.

The campaign for Cadbury's TimeOut bar involved asking consumers to snap a photo of the candy bar and then add their own creative touch. As an incentive, the brand offered a grade prize of $10,000 to whoever could produce the most creative snap. To drive awareness about the competition, the brand enlisted the help of New York-based artists Yok & Sheryo. These artists created three pieces of eye-catching street art depicting a TimeOut moment, which served as inspiration for consumers participating in the campaign.

By drawing a parallel between the use of Snapchat and the fun of enjoying a TimeOut bar, Cadbury managed to effectively engage with young consumers.
3.4
Score
Popularity
Activity
Freshness
View Innovation Webinars