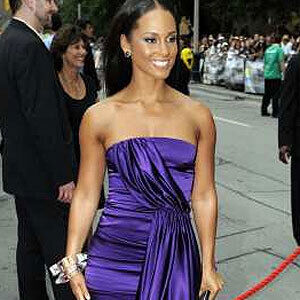 Truly living up to its nickname of Hollywood North, Toronto couldn’t be more infused A-list celebrities. Unlike in southern metropolitan where stars mingle, like LA and NYC, stars say they feel the Canadian city offers them much more privacy and respect from fans.

Of course rumors still whirled that Jennifer Aniston and her ex-husband Brad Pitt were spotted at dinner together — you could almost file that one under world news — but for the most part, Torontonians have been respectful.

The gallery shows some of the top TIFF 2008 fashions... so far. With a week to go still, there are sure to be even more dazzling designer reveals.

Celebrities in the gallery:
Alicia Keys in vibrant purple, strapless gown
Meredith Bailey in a plunging black halter dress
DJ Samantha Ronson at the eTalk Festival Party in a casual stripped top and a severely very cropped haircut
Brad Pitt in a suit and mustache at the Burn After Reading GalaJazz singer Nikki Yanofsky in a canary yellow sleeveless turtle neck dress at the ONEXONE Gala
Jennifer Hudson in a glittering gold number at the screening of "The Secret Life of Bees"
Renee Zellweger at the screening of "Appaloosa"
Dakota Fanning all grown up in a silky black parachute dress
Jennifer Aniston in an LBD at the "Management" screening
Keira Knightley at the gala screening of "The Duchess
3.7
Score
Popularity
Activity
Freshness