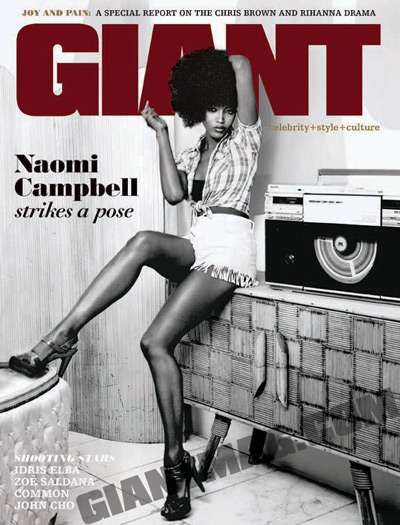 The 38-year-old mega diva, who is known for her exotic beauty, impeccable sense of style and her explosive BlackBerry-throwing temper, is clad in cutoff shorts, a plaid feminine shirt tied around her small waist and high-heeled sandals. Her voluminous hair is teased up into a 1960's-style Afro.

The temperamental catwalker tells Giant Magazine that she is a changed woman:

There comes a point when it all catches up with you and you have to deal with it. And that caused me to reassess myself and get real treatment for my anger and my addictions. Some people can handle a drink or a line of cocaine, but I’ve finally come to realize that for me, it’s all or nothing — and it has to be nothing.

Campbell, who was sentenced to two days of anger management classes after a phone she threw hit her former housekeeper, also talks about more useful things to do with a BlackBerry cellular phone, like making or receiving phone calls and texting.