Tattoos of Organs
Next
Set of
Related
Ideas 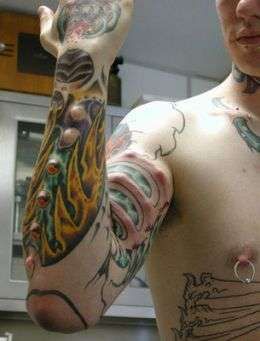 Trend Hunter has quite an extensive archive of posts about various kinds of body mods, such as one dimensional tats, piercings, 3D tattoos and cosmetic implants. Our lead image is a 3-D tat and implants combo which I find absolutely fascinating, but makes me squirm at the same time.

Implications - Over time, body modification is becoming an increasingly popular form of self expression. Though it was once seen as a taboo artform for deviants, it is now a culturally accepted, and even encouraged movement that has become the basis of many television shows and documentaries.
6.9
Score
Popularity
Activity
Freshness
View Innovation Webinars