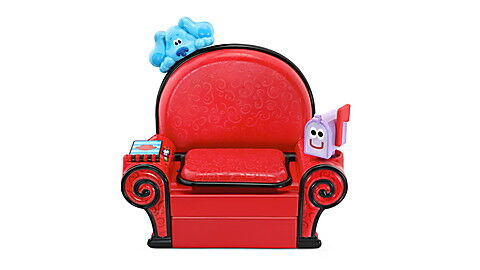 Grace Mahas — October 29, 2020 — Life-Stages
References: store.leapfrog
Share on Facebook Share on Twitter Share on LinkedIn Share on Pinterest
Little fans of the hit television show, 'Blue's Clues,' can now have their very own thinking chair thanks to the new Blue's Clues & You! Play & Learn Thinking Chair. Styled after the iconic chair on the show, the cartoon-like red couch features key elements from the show like the purple mailbox, the sketch pad, and of Blue, the blue dog.

The interactive Blue's Clues & You! Play & Learn Thinking Chair is interactive with players. Kids can hear fun phrases from the show as they play with the characters Josh and Blue and find the clues to figure out what Blue wants using the non-removable Handy Dandy Notebook. When players sit on the chair, they can hear Josh invite them to play, and once they stand up, Josh will encourage them to find clues.