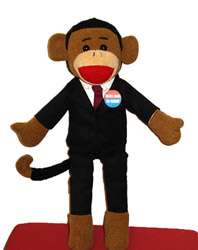 Ayman — June 14, 2008 — Social Good
References: thesockobama
UPDATE July 16th: After creating a lot of controversy, the Barack Obama Sock Monkey is no longer available. The site notes, â€œWe are very apologetic to all who were upset by our toy idea. We will not be proceeding with the manufacturing of this toy. Thank you.â€

Now you can own a Barack Obama sock monkey.... But is it racist?

With Barack Obama recently becoming the chosen democrat candidate and a favorite in the election, we can expect more novelty Obama toys and unique promotional items. The latest is TheSockObama, a sock monkey kitted doll that is born and raised in the United States of America.

According to the makers, â€œHe proudly stands 16â€ tall and displays his run for Presidential Candidate on his lapel. Staying true to his root, he is hand stuffed with just enough filling to give him a firm, but huggable feel. The removable suit jacket offers two looks for this future President - All Business or Hands On.â€

You can get your own monkey TheSockObama for $29.99 to â€œProp him up, pose him, squeeze him. Take him with you everywhere you go.â€

However, critics note that making Obama into a Sock Monkey is racist.
5.3
Score
Popularity
Activity
Freshness