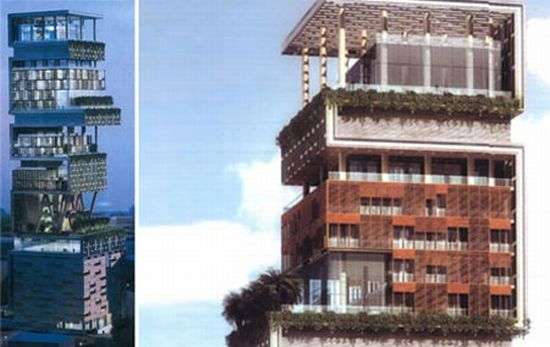 lourdes sanchez bayas — May 3, 2008 — Luxury
References: forbes & bornrich.org
Share on Facebook Share on Twitter Share on LinkedIn Share on Pinterest
Nearly a year after our first post, we have more info about the personal skyscraper being built by Mukesh Ambani, the head of the Mumbai-based petrochemical Reliance Industries. He is also the fifth richest man in the world with a net worth of $46 billion. Ambani is making the most of his bank account and is building a 22-story house for his family of four that is expected to set him back $2 billion.

The house, dubbed Antilla, will stand 550 feet tall and will have a total of 400,000 sq ft of interior space. The house is scheduled to be finished by January 2009.

"What's even more astonishing is that the stately home staunchly follows the principles of Vaastu, an Indian version of Feng Shui throughout the building with strategically placed furniture and accessories," BornRich says. "Then there's the health level with a swimming pool, a yoga studio and even an ice spa where residents can enjoy flurries of man-made snow!"