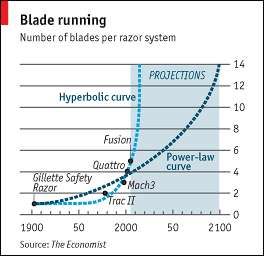 Walter Andri — March 21, 2006 — Marketing
References: economist & gizmodo
Share on Facebook Share on Twitter Share on LinkedIn Share on Pinterest
IT TOOK a leisurely 70 years after King Gillette invented the safety razor for someone to come up with the idea that twin blades might beâ€”or, at least sellâ€”better. Since then, the pace of change has accelerated, as blade after blade has been added to razors in an attempt to tech-up the â€œshaving experienceâ€.

For the most cynical shavers, this evolution is mere marketing. Twin blades seemed plausible. Three were a bit unlikely. Four, ridiculous. And five seems beyond the pale. Few people, though, seem willing to bet that Gillette's five-bladed Fusion is the end of the road for razor-blade escalation. More blades may seem impossible for the momentâ€”though strictly speaking the Fusion has six, because it has a single blade on its flip-side for tricky areasâ€”but anyone of a gambling persuasion might want to examine the relationship between how many blades a razor has, and the date each new design was introduced. (The Economist)