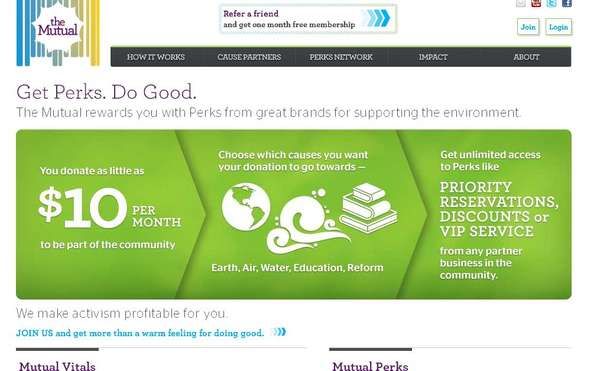 The Mutual Awards Do-Gooders with Deals and Discounts

Katherinev123 — December 20, 2011 — Business
References: themutual_ & psfk
Share on Facebook Share on Twitter Share on LinkedIn Share on Pinterest
Most of us have good intentions but the reality is that some people just need a push to do good, and The Mutual gives consumers that push. In exchange for their funds, The Mutual provides do-gooders with special deals and discounts at local shops and eateries.

However, consumers don't just pick a charity and get perks in return. The Mutual actually operates much like a daily discount site, except to access the deals and discounts, you must pay a monthly membership fee of $10. The company then donates 80 percent of the monthly fee to a charity, which includes organizations like Oceana, The Trust for Public Land and Center for Ecoliteracy.

In this way, The Mutual -- which has been referred to as the 'Groupon for Good' -- allows both consumers and businesses to benefit while also contributing to social issues. The Mutual's co-founder Daniel Vallejo describes the model as "profitable activism."
1.5
Score
Popularity
Activity
Freshness
Attend Future Festival