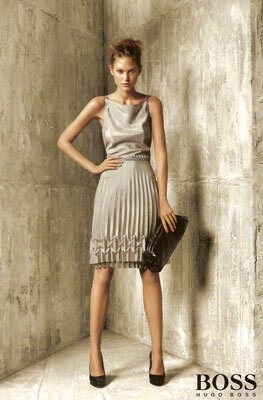 Bianca — August 30, 2007 — Pop Culture
References: nymag
With New York Fashion Week just days away, it's time for fashionistas to brush up on the whose who of models. New York Magazine gives their run down, photos included, on the it girls that will be parading the runways next week, including the Top 10 Models To Watch.

"Every Fashion Week, a few girls become stars," NYMag reports. "Last September, Agyness Deyn sealed her ascent from chip-shop girl to British Vogue cover when her platinum pixie cut took New York by storm. This February, Chanel Iman walked every major show from Zac Posen to Michael Kors and made it to the cover of Vogue in May. Who will break through this time? These are the up-and-coming models to watch."

Catherine McNeil (pictured in Hugo Boss ad)
"The biggest Australian model since Gemma Ward is a cat-eyed brunette who opened the fall Alexander McQueen, Alessandro Dell'Acqua, Givenchy, and Missoni shows in Paris and Milan. Earlier this summer, she also hit the cover of V and French Vogue. Currently, McNeil is the face of Hugo Boss and Donna Karan and stars in the fall Versace campaign alongside her model-crush, Kate Moss."

Lara Stone (pictured getting hot pink lips done)
"This Dutch beauty won over Times fashion critic Cathy Horyn (who called Stone the "anti-model" on her blog) and French Vogue editor Carine Roitfeld. She walked every fall 2007 runway, from Louis Vuitton to Stella McCartney to Karl Lagerfeld, and opened Givenchy's couture show. And her gap-toothed grin, intense glare, and Hitchcock-blonde hair have monopolized the pages of W and V magazines this year."

Suvi Koponen
"She replaces pregnant Natalia Vodianova as the face of CK Collection, and she's the Balenciaga and Mulberry girl for fall 2007 â€” not bad for one season. Her strong profile and shoulder-length blonde hair have been noticed on the runway for crowd favorites Miu Miu, Nina Ricci, and ChloÃ©."

Irina Kulikova (pictured in the Prada ad)
After being discovered by Liv Tyler, this Russian blonde was whisked to New York for a Calvin Klein exclusive and then on to Milan to open the fall Prada show. This summer, she's been a star of the Italian label's ad campaign. But her most eyebrow-raising moment is for Marc Jacobs; the 16-year-old posed topless for his Daisy fragrance campaign.

Anna Barsukova (pictured on the runway)
She's been around for a few seasons, but she's starting to pick up steam with great runway bookings, including Chanel's fall 2007 couture show and 2008 resort presentations. The coveted Marc Jacobs campaign for fall 2007 really put this Russian looker on the map.

Olga Sherer
Following in the footsteps of Russian greats like Natalia Vodianova, Scherer opened Marc Jacobs's show last season and now stars in Steven Meisel's Lanvin ads. Her pale skin and flame-haired look should stand out in the upcoming shows.

Georgia Frost
In just one season, this platinum-locked British beauty scored both the Burberry and Dolce campaigns and now appears in the latter's accessories and eyewear ads. On the catwalk, she's showed her versatility with fall shows for Vivienne Westwood, Peter Som, and Heatherette.

Magdalena Frackowiak
Last year, the pillow-lipped Frackowiak opened YSL's spring 2007 show and closed the fall Christian Dior runway in Paris. She was in Harper's Bazaar earlier this year, and you can catch her now in Ralph Lauren's ads.

Ali Michael
Leading the return of the American model, Michael made a splash in the summer resort shows, walking in Anna Sui and Christian Dior. Her heavy eyebrows and haunting eyes have already appeared in two W spreads this summer.

Meagan Collison
With no runway shows and just one published editorial under her belt (Dazed & Confused), this Canadian has garnered huge media buzz without doing much of anything â€” yet. However, with her chic thick brunette fringe and icy blue eyes, she's a shoe-in for upcoming shows and future â€œItâ€-girl status.â€”Kendall Herbst
1.9
Score
Popularity
Activity
Freshness