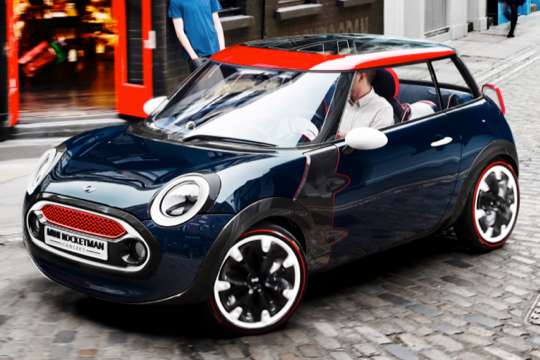 The MINI Rocketman Debuts in Time for the 2012 London Olympics

Michael Hines — June 15, 2012 — Autos
References: highsnobiety
Share on Facebook Share on Twitter Share on LinkedIn Share on Pinterest
It was almost a year ago that the MINI Rocketman made its first appearance on Trend Hunter, and now the concept is finally gracing the streets of London. Back then, the Rocketman existed only on paper, but now it's a reality, arriving just in time to steal some thunder from the 2012 London Olympics.

The MINI Rocketman is a futuristic city car in the simplest sense. Its carbon-fiber-reinforced plastic body has a smooth and shapely look, and its interior is like nothing else offered today. MINI designed the concept to showcase the spirit of British automobile styling and engineering, in addition to showing the world its vision for what the city car of the future should look like. The Rocketman is still just a concept, but MINI has a habit of producing show cars and one-offs, so it may only be a matter of time before this four-wheeled spaceship is in showrooms.