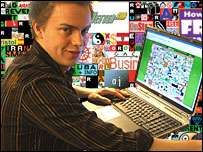 Young Entrepreneur Gets Lucky With His Brainstorming

It started with a blank notepad, an overdraft and a shortage of socks. Now it’s a million-dollar business.

Last August, as a three-year degree loomed, Alex Tew lay on his bed in his family home in Cricklade, Wiltshire. It was time for his nightly brainstorming session.

This time, the problem was his finances. He already had an overdraft, which was sure to multiply at university, and he felt his poverty was reflected by his lack of decent, or matching, socks.
3.3
Score
Popularity
Activity
Freshness
Get Trend Hunter Dashboard