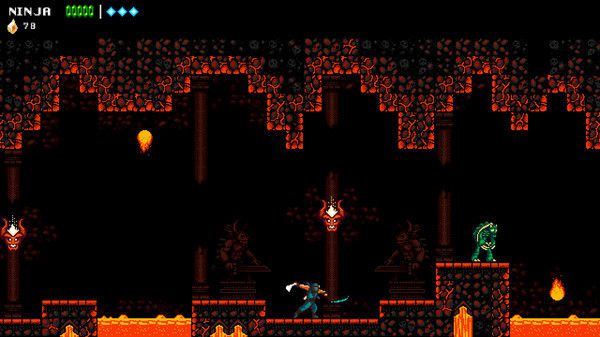 The Messenger is a Ninja Gaiden-Esque Adventure For Modern Gamers

Justin Lam — March 27, 2018 — Tech
References: store.steampowered & venturebeat
Share on Facebook Share on Twitter Share on LinkedIn Share on Pinterest
The Messenger is an upcoming retro-action platformer that manages to capture the intensity and magic of 8-bit classics like Mega Man and Castlevania. Developed by Quebec-based studio Sabotage, The Messenger takes heavy inspiration from the Ninja Gaiden series and utilizes similar aesthetics with modern designs. The game is set to release on the Nintendo Switch and PC, and was even part of Nintendo's Nindies presentation at GDC 2018.

The game will feel instantly farmiliar to most gamers with an 8-bit background, thanks to its tight platforming and beautiful pixel graphics, but will also engage new gamers with amazing level design and non-linear gameplay. Similar to Ninja Gaiden, players can attack with a short range sword and easily cling onto walls. However, movement does deviate from The Messenger's inspiration as it adds a level of complexity to platforming. The non-linear aspect allows players to enter a future world, denoted by a change to 16-bit graphics, that functions as a fun take on the Light World/Dark World mechanic seen in classic games like The Legend of Zelda: A Link to the Past.
3.4
Score
Popularity
Activity
Freshness
Jeremy Gutsche Keynote Speaker