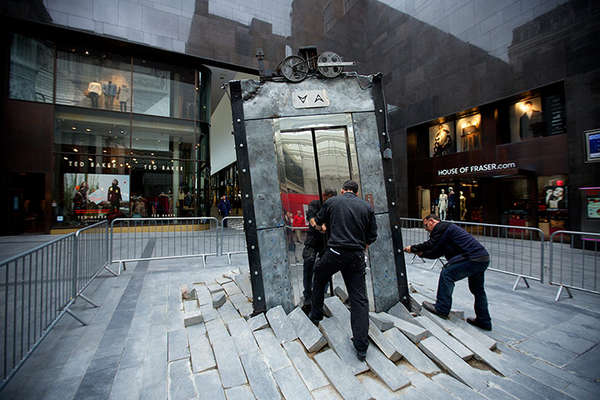 The Lift by Oded Hirsch Comments on Out-Of-Control Consumerism

Meghan Young — September 21, 2012 — Art & Design
References: liverpoolbiennial & mymodernmet
Share on Facebook Share on Twitter Share on LinkedIn Share on Pinterest
The art installation titled The Lift by Oded Hirsch, an Israeli artist working and living in New York, will have people scratching their heads. Interestingly enough, that was one of the criteria when Liverpool Biennial commissioned the piece from Hirsch. It is essentially a traditional elevator erupting from the earth below. Among many speculations, it wouldn't be surprising if some people mistook it for a time-traveling hoax.

Messing up the once pristine floor of the shopping district at Liverpool One, The Lift by Oded Hirsch addresses the escapist-capitalist space and consumerist mentality it breeds. Hirsh reveals, "I decided I wanted to create a work that would respond to the new social reality that was created there[....] I had these images of a cityscape getting out of control. From there I got to the idea of a rebellious elevator, that bursts from the earth as if from some underworld beneath the shiny shopping center."
2.7
Score
Popularity
Activity
Freshness
View Innovation Webinars