Death Of The Supermodel 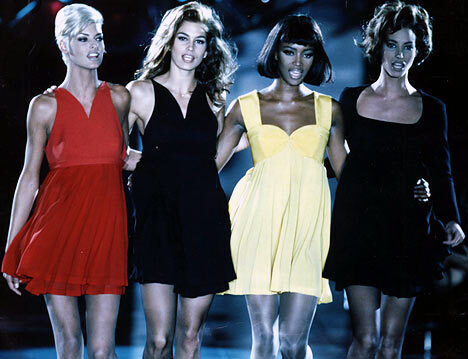 Kyla Schmidt — September 5, 2007 — Pop Culture
References: dailymail
Share on Facebook Share on Twitter Share on LinkedIn Share on Pinterest
Wikipedia says the definition of a SUPERMODEL is "is a highly-paid elite fashion model who usually has a worldwide reputation and often a background in haute couture and commercial modeling."
The term supermodel became trendy in the 80's and early 90's when a group of 6 beauty queens or, "The Big 6" as they were called, entered the spotlight. They weren't just pretty faces - they became legends, appearing on talk-shows, front pages of gossip mags, and they even got movie roles, letting them rake in millions.

Claudia Schiffer, Cindy Crawford, Kate Moss, Linda Evangelista,Naomi Campbell, Christy Turlington and Kate Moss wouldn't get out of bed for "less than 10,000 a day," but now. R.I.P... the Supermodel is dead.

Or so says Claudia Schiffer, one of the original 6. Like the ice age claimed the dinosaurs, she claims supermodels are extinct!
T
he German beauty recently said to the press that aspiring models can no longer achieve the kind of fame she or the others had in the 90's because the competition is too strong and there are just too many models these days. According to the Daily Mail, she was quoted, "The advertising industry is very much taken with pop stars and actresses. Supermodels like we once were don't exist any more. I can remember when I needed four bodyguards to get backstage from a Chanel show just to my car. And that wasn't only me. It isn't like this any more."

The only model Schiffer even claims to come close these days is Brazilian beauty Gisele Bundchen. According to Schiffer "Her face is well known, her name is recognized - but no other girl comes to mind that people in the street would recognise."