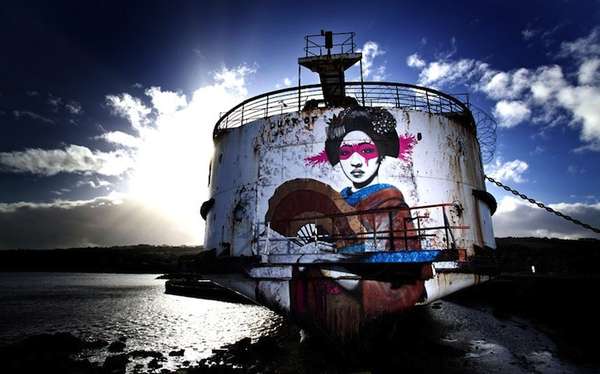 Ariel Weber — February 12, 2013 — Art & Design
References: dudug & mymodernmet
Share on Facebook Share on Twitter Share on LinkedIn Share on Pinterest
Using the motto "your ship looked like s*** so we painted it," the international graffiti art troupe DuDug have initiated the Black Duke project. Tagging a disheveled and abandoned ship, the group used it not for its original purposed, but reworked it into a canvas for their art.

The project took its name from the once highly regarded cruise liner, which was called the Duke of Lancaster. Since 1979, the boat, found on the beaches of Llanerch-y-Mor in North Whales, has been left to rust. Rather then continuing to leave it to crumble, the troupe decided to take it upon themselves to upgrade it in an effort to attract a larger tourist population to the area as well as inform the public of the rich history of the ship. To date, The Black Duke project has created eight spectacular large-scale graffiti posts including contributions from Fat Heat, Fin DAC and Lora Zombie.
1.8
Score
Popularity
Activity
Freshness
Access Advisory Services