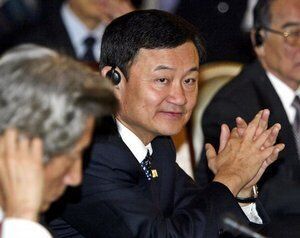 Nigel Goodwin — January 25, 2006 — Pop Culture
References: newsfromrussia
Share on Facebook Share on Twitter Share on LinkedIn Share on Pinterest
Further blurring the lines between reality and entertainment, Thailand's Prime Minister has created a reality show detailing his five-day trip through one of his country's poorest regions. PM Thaksin Shinawatra will be followed by 40 television cameras and his daily activities will be broadcast to the country's population.

Just when you thought every possible idea had already been exploited for reality TV, someone launches a show for political junkies. I'm not going to watch it myself, but it just goes to show that there's always a new angle to an old idea.

"In many different countries all over the world, reality television evokes images of telegenic contestants battling each other on a tropical island or engaged in trysts at a seaside mansion. Thailand's prime minister is pioneering a new style of reality TV, being a main hero himself, and aired on the network his family controls. "Backstage Show: The Prime Minister," which runs through Friday, features Prime Minister Thaksin Shinawatra on a five-day tour through one of the poorest regions of Thailand. His government bills the show as an opportunity for the prime minister to meet the needy and tackle poverty as the nation watches him work." - News From Russia
2.4
Score
Popularity
Activity
Freshness
Get Trend Hunter Dashboard