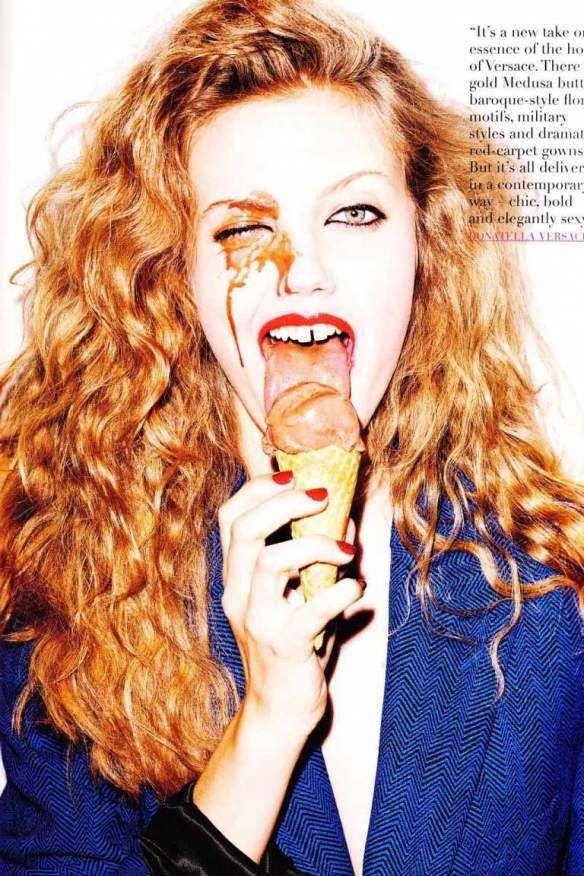 Corinne Guirgis — August 15, 2011 — Pop Culture
References: i-donline & piecesnmelodies
Share on Facebook Share on Twitter Share on LinkedIn Share on Pinterest
In keeping with his shockingly seductive style, the Terry Richardson i-D Pre-Fall 2011 editorial screams wacky, sultry and totally out-of-the box. Red-headed vixen Lindsey Wixson takes to the lens in this quirky, laugh-inducing shoot which will have you licking your lips as she licks that melting ice cream cone.

Appropriately entitled ‘Ice Hot!,’ the shoot distorts Wixson’s facial expressions to complement the body-hugging, vintage leather styles of Versace that she sports throughout. The spread is reminscent of much of Richardson’s work with supermodels from Kate Moss to Eniko Mihalik and is perhaps an indicator of a new muse for the famed and controversial fashion photog.

Implications - In fashion, art and photography, sexually-charged images are often the source of much public buzz and media attention which drive consumers to models, photographers and publications who are boundary-less when it comes to controversy.
6.5
Score
Popularity
Activity
Freshness
Attend Future Festival

50 Mirror Image Shoots
From Holographs to Twintography, These Shoots Have You Seeing Double