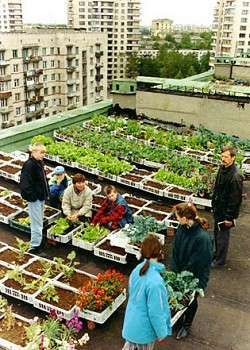 Bianca — May 26, 2008 — Lifestyle
References: nydailynews
Share on Facebook Share on Twitter Share on LinkedIn Share on Pinterest
In the past when I've stayed with friends in New York, they - and it seems everyone else they know - eat out for every meal. That's all changing though. With the soaring cost of food prices, urban vegetable gardens, a new dining phenomenon, is taking over the Big Apple.

Homegrown dining is becoming increasingly popular, favored not just by health freaks, but also by the previously organically-unphased.

Around New York are urban gardening centers where people can be rent a space to grow their greenery, and they've been booming with business this year. At Drew Gardens in the Bronx, for example, membership doubled from last year, and W.Atlee Burpee & Co, the American largest seed company has sold twice the seeds of last year.

Another niche market enjoying terrace farming are those of different ethnic backgrounds as it allows them to grow the foods they might not otherwise find in stores.

"People with Southern roots like cultivating okra and collard greens, Latinos favor hot peppers and squash, and spinach is most popular among the Asian community," the NY Times says.

People are slowly being forced to go back to more traditional times when personal agriculture was mandatory for most for survival. There's an air of romance about having your own personal garden too, particularly if you have the luxury of having a private garden, patio or designated rooftop space to plant your most favored, nourishing foods.