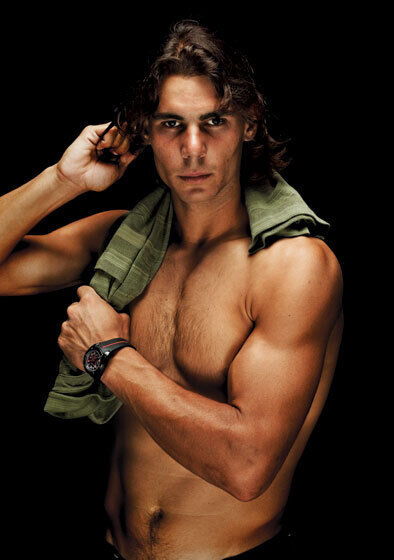 Pearl — August 21, 2008 — Lifestyle
References: nigelparryphoto & nymag
Share on Facebook Share on Twitter Share on LinkedIn Share on Pinterest
NYMag.com aced it with their article on Rafael Nadal. He is not only the newly crowned No. 1 male tennis player in the world but “The Beefcake in the Backcourt”. In a series of photos by Nigel Parry, Nadal shows off those muscles which decimated his rivals on the court. The photographer did a great job to highlight the Spaniard’s high cheekboned good looks in male model style shots particularly in the black and white photos.

This has been an incredible year for this unassuming and humble tennis player. Winning at Wimbledon (see video) and gold at the Olympics were just the highlights of his run of wins.

For a man who claims he didn’t have anything to do with the design of his clothes, he cuts a certain raffish style of his own with his tousled long hair, muscle shirts, long shorts and his trademark bandannas. The total opposite to Roger Federer’s prim style.

Additional pictures and more information on Nadal can be seen on his official website. There he is known as Rafael (the Spanish spelling of Raphael) and the endearing nickname, Rafa.
4.5
Score
Popularity
Activity
Freshness
Attend Future Festival