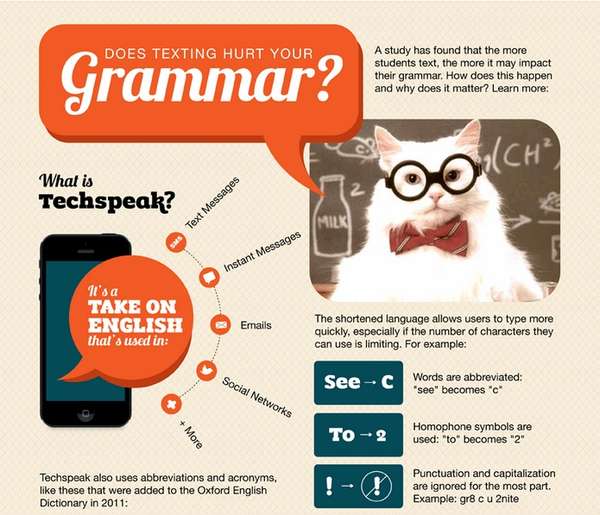 The Chart Discusses Negative Affects of Techspeak for Youth

Simal Yilmaz — February 17, 2013 — Tech
References: onlinecollege.org
Share on Facebook Share on Twitter Share on LinkedIn Share on Pinterest
Techspeak has become a prominent form of language ever since technological gadgets became a primary communication channel. Abbreviations, word substitutions, acronyms and emoticons are all part of the text messaging language, and it's slowly but surely becoming an integral part of everyday language.

For older generations, tech talk is new and doesn't seem to hinder quality of language. However, as this infographic points out, this is simply not the case for most young people. The decline of language quality in future generations is a very legitimate and fairly new concern.

This chart demonstrates the current public opinion on the kinds of ways new generations might be affected by this language transition, as well as the arguably changing importance of written and verbal communication skills in the future.
5.7
Score
Popularity
Activity
Freshness
View Innovation Webinars