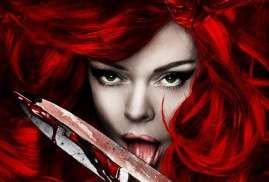 Alexandra Choli — February 25, 2009 — Art & Design
References: en.wikipedia.org & flylyf
Share on Facebook Share on Twitter Share on LinkedIn Share on Pinterest
Red Sonja, the 1985 sword and sorcery film, starring Brigitte Nielsen along with extremely muscular Arnold Schwarzenegger, is about to see its remake realized by next year. In the role of the merciless redhead will be “Charmed” Rose McGowan, while the production and unofficial co-directing will be the work of Robert Rodriguez, whose signature is found on viral successes such as Desperado and the more recent and quite relevant Sin City. Filming has reportedly just begun for the action-packed movie, although apart from this series of fascinating, vengeful posters, no more information has been released.

The comics-inspired film craze is now expanding to accommodate adaptations to older filmmaking attempts; and although graphics will be much easier to top, the question still stands regarding capturing the passion and vigor of a movie that our very own Conan honored with his appearance.
4.3
Score
Popularity
Activity
Freshness
Get Trend Hunter Dashboard