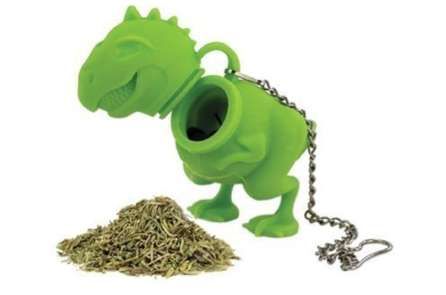 The Tea Rex Tea Infuser Gives You a Bite of Flavor

Part toy, and part functional culinary accessory, the little green prehistoric character doesn't need to come out for just five minutes a day. Made of a durable plastic, the hollow tyrannosaurus rex closes at the neck, where a dangling chain might make a good leash for an imaginative kid.

But as far as its principal duty is concerned the dinosaur has several holes in the top of his head, to allow water to seep in and gain flavor from the tea leaves, but make it difficult for the drenched infusion to rise up and escape. For the full fun as well as the function effect, the Tea Rex Tea Infuser is best enjoyed in a transparent mug.
2.3
Score
Popularity
Activity
Freshness
Get Trend Hunter Dashboard