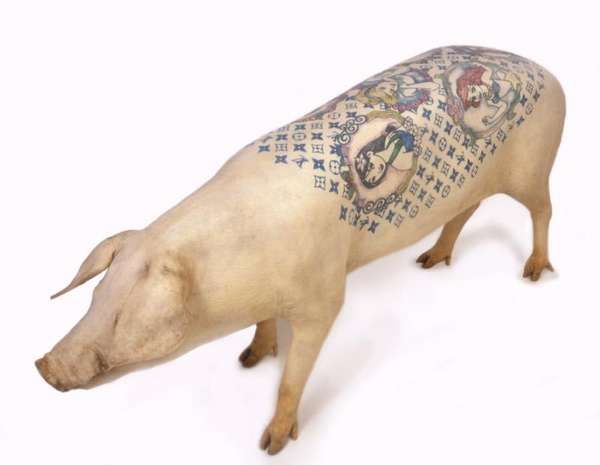 TrendHead — October 18, 2008 — Art & Design
References: friezeartfair & wimdelvoye.be
Share on Facebook Share on Twitter Share on LinkedIn Share on Pinterest
We’ve covered Wim Delvoye’s tattooed pigs before here at Trend Hunter. Wim Delvoye, otherwise known as the ‘artist with the pigs,’ has attracted even more attention at this week’s opening of Frieze Art Fair in London. Not only does he love to tattoo himself, he also loves tattooing pigs. He has them stuffed and exhibited, too.

With tattoos that depict everything from guns, skulls, hearts, roses and Harley logos, these pigs and their skins have been under the needle for hours to be adorned like proper sailors. Some of them even look more tattooed than your average Hell’s Angels biker.

With Delvoye’s tattooed and stuffed pig shown at Frieze, this is bound to be a bizarre new trend in livestock. But will it also become a fast-selling piece of art?
4.4
Score
Popularity
Activity
Freshness
Access Advisory Services