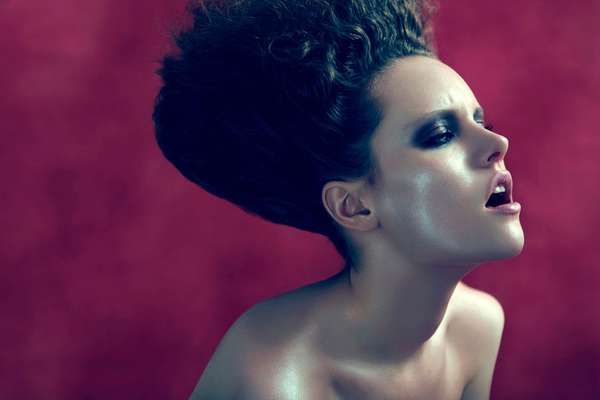 Jordy E — March 27, 2012 — Fashion
References: lina-tesch & touchpuppet
Share on Facebook Share on Twitter Share on LinkedIn Share on Pinterest
The 'Taste of Darkness' series by fashion photographer Lina Tesch features the M4 Modeling Agency beauty Ann Christin. Shot amid a minimalist dark-red backdrop, the model's hair and make up was styled by Ina Cierniak, who helped to transform the model's tresses into a sky-high pompadour.

The Christin feature showcases cut-out dresses, metallic square-shaped earrings and dark-tipped fake fingernails. With a chained police cap, the authoritative and almost dominatrix-like nature of the project is made clear.

Although the dark leather and heavily buttoned pieces are all remarkable in their own right, the pièce de résistance of the spread is undoubtedly Christin's elongated hair 'do. While grandiose pompadours have been the focus of various 1950s-inspired photo shoots, very few have rivaled the height and precision that Cierniak has produced in this spread.
4.2
Score
Popularity
Activity
Freshness
Get Better and Faster