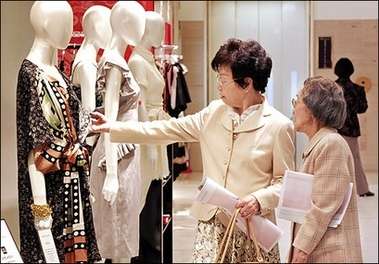 Takahashi is one of Tokyo's baby boomers and elderly that are beginning to dominate the Japanese population. The buying power of these generations has also increased, and is a trend fashion retailers are targeting.

Takashimaya is the largest department store chain in Japan. On April 19, they re-opened their Tokyo location in the trendy Shinjuku district after undergoing a 13 billion yen (USD$110 million) renovation. A spokeswoman for the company said it plans on getting its investment back in no timeâ€”the company expects to make 10 billion yen in its first year.

The store is known for the brand names it carries and is famous for catering to the fashion and lifestyle needs of Japan's trendiest consumers. Takashimaya is looking to gain broader appeal with Japan's aging demographic, however, a niche market they have deemed the â€œstylish elderly.â€

Takahashi loves the new store. She says that most stores in Tokyo are geared towards more affluent Japanese, the ones she coins the â€œmadams.â€ She loves shopping at the Takashimaya store, which she says â€œseems a lot more fashionableâ€ than other fashion retailers.

The aging population is happy with the recognition they are receiving. The spokeswoman said that the elderly â€œwant to keep living in the city where everything is convenient, from shopping to health care.â€

It's not just Tokyo's females that are fashion fanatics. Style savvy older gents can kick back on oakwood furniture, slurp back some sake at the store's cigar bar, or peruse the collection of long umbrellas and 50's-inspired hats.

â€œMen of this age group have actually been getting quite trendy in the past decade and have become more interested in fashion and are no longer orthodox in their choices,â€ reported another spokeswoman.

One 66-year-old man blew 100,000 yen (USD$850) on a hip new wardrobe. He said his new attire will let him â€œgo out and have fun.â€ He won't have to travel far to do that, either. The Shinjuku district is home to Tokyo's most visible red light district, welcoming to the gay community as well as boasting â€œround-the-clock nightlife.â€

The renovations were intended to make the shopping experience more appealing for older customers. The first few floors are packed with luxury items including opulent jewelery, perfume and makeup. It also features various seating areas where tired shoppers can rest.

The higher floors are geared more towards younger consumers. The top floors have an extensive selection of baby merchandise as well as an art gallery.

It only seems appropriate that in a time when so many fashion trends of the past are resurfacing, that those who made the trends famous are regaining their interests in style.