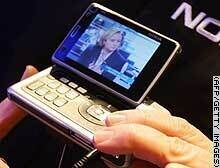 Nigel Goodwin — March 16, 2006 — Tech
References: cnn
Share on Facebook Share on Twitter Share on LinkedIn Share on Pinterest
Television viewing on mobile phones should be commonplace by 2008, at least in Europe and the US. This opinion was recently expressed by Nokia, the world's largest cell phone maker. Trials conducted in the past year have shown that consumers like the service and are willing to pay 5 to 10 euros per month for it.

"Excited by the prospects of a possible cash cow, the mobile and broadcast industries are keen to launch commercial services in Europe and the United States," reports CNN, "while South Korea already has them in operation."

"There are currently half a dozen mobile TV technologies which work in many different parts of the frequency band."

Because of this frequency variation, different countries will adopt mobile TV at different rates. Finland, France, Spain, Italy and the Netherlands are expected to adopt it commercially in the near future, while the process may take longer in other countries.
4.6
Score
Popularity
Activity
Freshness
Get the 2021 Trend Report FREE