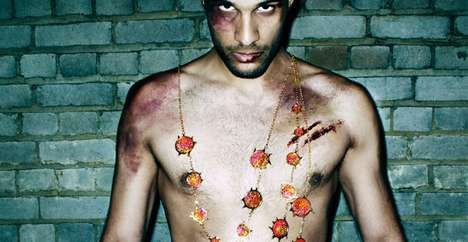 The line is made up of gold, rubies, garnets and sapphires. Each piece is made to look like gunshot wounds, deep cuts, among other common and not-so-common injuries. The super-artistic collection by Arulpragasm (also known as musician MIA's older sister) is not just cool body art, but it also has a deeper meaning behind it.

Arulpragasam explains that she depicts violent imagery like "machine gun fire to the body, slashes, butchering and hacking of the throat, head and ears to portray the inhumanity around the world."