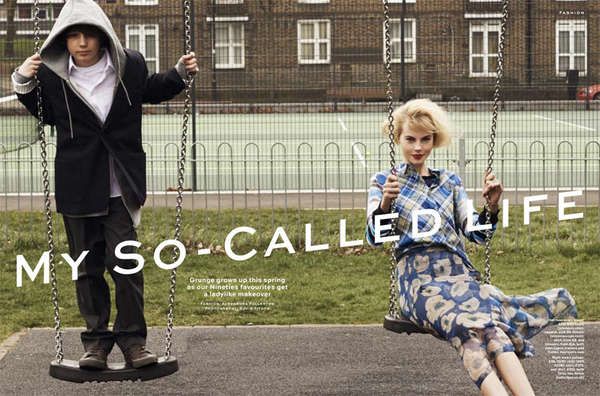 Meghan Young — April 16, 2013 — Fashion
References: stylist & fashiongonerogue
Share on Facebook Share on Twitter Share on LinkedIn Share on Pinterest
The Stylist Magazine 'My So-Called Life' editorial showcases a range of grunge-inspired outfits fit for grown-ups. Although the title refers to the teen angst-ridden television show that starred Claire Danes, the only angst present in this photoshoot is found in the grey skies above. A modern spin on the Seattle grunge scene, the editorial is filled with ripped denim and plaid shirts that have been femininely tailored.

Lensed by photographer David Titlow, the Stylist Magazine 'My So-Called Life' editorial appears in the latest issue of the British publication. It stars model Wylie Hays. She was styled by Alexandra Fullerton, who pulled pieces from the racks of such labels as Dries van Noten, 3.1 Phillip Lim, Acne, Paul Smith and Equipment. If a Stepford wife decided to go grunge, this is what she would look like.
5.6
Score
Popularity
Activity
Freshness
Get Better and Faster