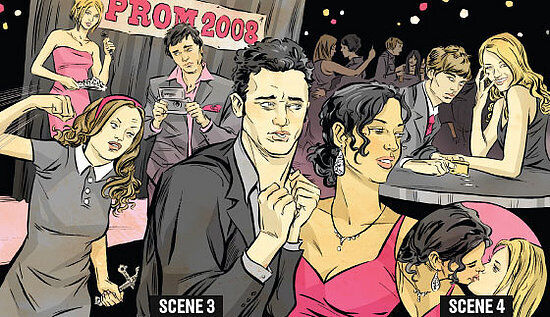 The writers of Ugly Betty took the script of Gossip Girl. The Office writers tackled Friday Night Lights and vice versa and Grey's Anatomy was written by a writer from Dexter. The writers from The Daily Show went all out though; they created endings for 13 shows! They spoofed Lost, Heroes, House, How I Met Your Mother, Pushing Daisies, Mad Men, CSI, Cavemen, American Gladiators, Discovery Channel Planet Earth, Man vs. Wild, Rachael Ray, Who Wants to Be a Millionaire, So You Think You Can Dance, and Are You Smarter Than a 5th Grader?

New York Magazine made the fun proposal and assembled a stellar article detailing the results.

An excerpt from the 16th fauxpisode of Gossip Girl:
"Hoping to dull his Waldorf-induced woe, Nate stumbles upon his dad's pharmacopoeia and tastes a little nose candy himself. Our newly addicted Adonis tries to keep his hobby under wraps, but snoopy Serena sniffs out his hard-partying ways and falls down the rabbit hole herself."

From The Office spoof:
"As the quarantine drags on, food supplies in the office snack room have dwindled down to just the left Twix in a Twix packet. Michael decides that his employees must compete for the last remaining food in an â€œOffice Idolâ€ singing competition: Michael is Simon, Kelly is Paula, and Stanley is offended that he has to be Randy. Oscar wins, but Creed has stolen the Twix. Dwight decapitates him and hangs his body from a flagpole."

From Friday Night Lights:
"Flags are flown at half-mast in a day of mourning for the Panthers' overtime loss. Coach Taylor's daughter Julie robs the Dillon Applebee's. 'I love you, Jules,' he says, 'but you just don't rob Applebee's.'"

From the Grey's Anatomy parody:
"Derek goes on an epic search for Burke (he needs him to be his best man) and finds him in Alaska, living as a professional fly fishermanâ€“slashâ€“mountain man. Back at the hospital, Richard realizes Meredith is as desperate as he is, so he makes a pass at her and they make out in the locker room."

Some excerpts from The Daily Show scripts:

CSI:
"In a case designed specifically to take advantage of the CSI unit's skills, the cops must track down a serial killer who stabs his victims with knives made of frozen bodily fluids."

Heroes
"The power to keep track of all the new heroes becomes way rarer than invisibility or time travel. Seeking to scrimp on budgets, NBC rolls out an entirely special-effects-free spinoff called Bystanders."