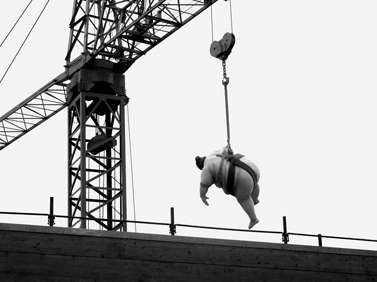 Jason Soy — July 29, 2011 — Art & Design
References: stefanobombardieri.it & urhajos.tumblr
Share on Facebook Share on Twitter Share on LinkedIn Share on Pinterest
Sure, Pink Floyd had a huge inflatable pig flying over a factory, but Stephano Bombardieri can claim he hung a big sumo wrestler over a city using a crane. Okay, so it's only a sculpture of a sumo wrestler, but it's still quite a feat to have under your name.

Stephano Bombardieri is an impressive sculptor whose worked all over Europe. His specialty lies in creating hyperrealistic sculptures, and as you can see in the pictures of the hanging sumo, they're good enough to trick most people (with bad vision at least).

Implications - Publicity stunts, such as hanging a human-like statue over a city utilizing a crane, attracts consumer attention because it's an unexpected occurrence in a seemingly mundane setting. Corporations looking to create effective media campaigns may consider presenting the ads in unexpected locations as opposed to tried and tested settings.
1.1
Score
Popularity
Activity
Freshness
Attend Future Festival